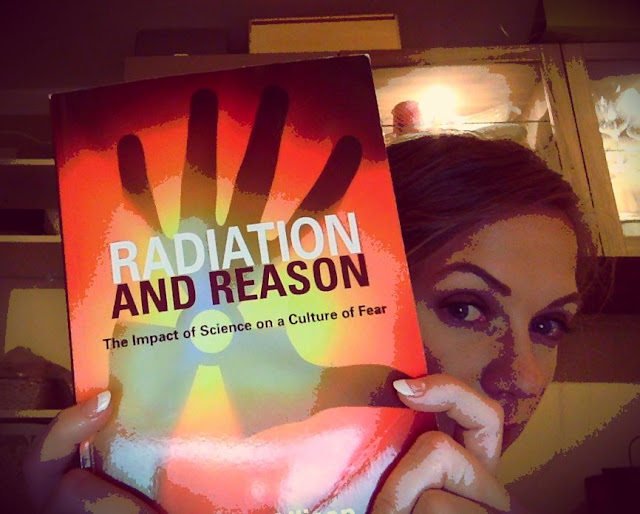 "Radiation and reason" by Wade Allison
So tonight I'm preparing for a talk I'm going to give at Kongsberg Library tomorrow, which is the day that marks the 30 years anniversary for the tragic accident in the nuclear power plant in Chernobyl, and I feel like I need to address some of the myths and misconceptions about the accident and its consequences. The statement in the title of this blogpost is one of these myths, and it's of course NOT true.
CHERNOBYL DID NOT EQUAL 100 HIROSHIMA BOMBS!
The thing is that this statement comes from someone (only) looking at the release of one isotope of caesium, and then comparing how much of this isotope was released in the Hiroshima atomic bomb explosion, and how much was released in Chernobyl. It is true that the release of one particular isotope was 100 times bigger from Chernobyl than from the Hiroshima bomb, but that tells us more or less zero...
The reason why there was a bigger release of caesium from Chernobyl was that even tough the source of energy is fission in both a nuclear power plant and an atomic bomb, the fission process isn't exactly the same: the atomic nucleus is divided in different ways in those two, and you don't get the same fission products (caesium isotopes are some of them) from a nuclear power plant versus a bomb. (Remember, there was no nuclear explosion in the Chernobyl reactor - the radioactive release came from the normal operation.)
You do get caesium in both fission processes, but the amount of the different isotopes is different, and there's no problem finding certain isotopes that were released in much higher quanta in the Chernobyl accident than the Hiroshima bombing (like caesium).
What does this tell us?

The only thing it might tell us something about is that caesium is produced in different quanta in an explosion versus a power plant.

What does this saying makes us feel or think?
It makes us scared.

It makes us instantly think that Chernobyl was 100 times worse that the Hiroshima bomb. The accident was bad, but it doesn't even come close to dropping an atomic bomb on a city...!
What really kills in a nuclear explosion/atomic bomb is the extreme release of force, and not the radioactivity - believe it or not. The release of one specific caesium isotope from Hiroshima actually isn't particularly interesting. And the fact that there was a release of one certain type of caesium that was 100 times greater in the Chernobyl accident than the Hiroshima bombing does not tell us that Chernobyl was like 100 Hirsohima bombs!
Quote from this interesting article with five facts about nuclear power plants:

There's no getting around it: Chernobyl was awful. The design of the reactor was terrible, its purpose for being was terrible, its operation was terrible, the test they were performing when it blew up was terrible. The reactor was designed to primarily produce plutonium for nuclear weapons. The reactor was housed in a warehouse rather than a full containment building. It was designed so overheating sped up the reaction until the whole thing burst like an overinflated balloon. But we don't have to fear nuclear energy just because the Soviets did it the dumb way. That would be like banning cars because some drunk guy crashed one while trying to steer with his penis.

PS: I'm going to be a guest on Tidenes Morgen on P13 tomorrow morning around 8 AM, it will not be about the Chernobyl accident, but maybe it'll be fun to listen to 🙂