Hopp til innhold
And then the week was over again, just like that, and a new week has already begun! And just like that, Alexandra started school. It feels surreal that I have a school girl at home, and I think it's so cool that we're both part of the Norwegian educational system, but at the very beginning and the very end. This post isn't about Alexandra starting school though, more about that some other time...:)
Right now
Even though I wasn’t the most productive ever last week, I actually managed four of the five steps I was supposed to get through, and I'm quite happy with that. The only thing I didn’t do was the one about making a drawing of my plotting program, so I just need to get this right this week! I also have to start three presentations, and already on Wednesday I'm giving my first talk this semester (so one of those three talks needs to be started AND finished this week). To get my results right for article number three and the talk for Bruges, I need to make that drawing – luckily, Anders can help me, since he’s back from Philadelphia again <3 I'm hopeful!
Feeling of the week
Want. I missed Anders a lot last week (yes, even though it was just one week without him), and it's not because I don't have fun when he's not here, I just prefer when he is 🙂 As Sunniva supervisor said: Well, good thing you miss him - what if you didn't? Wouldn't that have been just horrible? And she's of course right, and I am happy I miss him when he's gone <3
Boost of the week
The biggest boost of last week was without doubt when I sent away my article (paper)
to all the co-authors. As I told you on Saturday I felt like I got high just after I pushed the "send" button - it would actually have been fun if I had measured the levels of different hormones in my blood before and after I sent it. My guess is that the levels of adrenaline and endorphins (?) were higher after, but I am no expert on hormones, so I may be wrong about...;)
Bummer of the week
The biggest bummer of last week was the message from the Norwegian tax authorities! First they told me I had to pay one amount in taxes (from last year), then they had forgotten some stuff, and they told me (when we called them, and we called twice, and talked to two different people about this) I had to pay twice what they first told me. Then, this week I got their final message, where it said I have to pay even 20 000,- more :/ Well, c'est la vie...
Person of the week
Anders was in Philadelphia all of last week (he came back home again yesterday <3), so I thought much more about him and us than I normally do, when he’s here, so he’s definitely my person of the week.
Craving of the week
Gum. I always crave gum, and I eat a lot of it. I normally buy five packs at a time, and that’s almost sufficient for one week 😀
Picture of the week 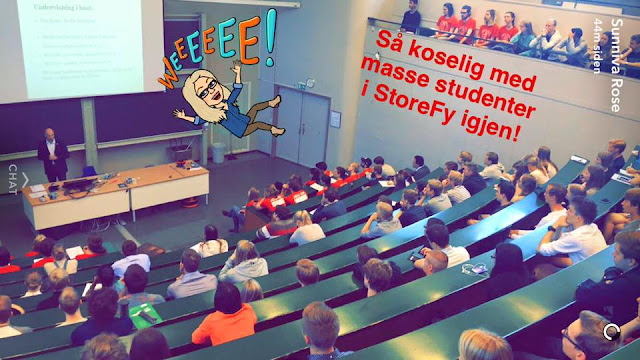 Last week was the first week for all the new students (you know, Fadderuken, where they get to know older students and each other and stuff), and finally Campus was filled with people again. This picture is from the very first day, meaning last Monday, and I got so happy that Store Fysiske Auditorium (StoreFy) was packed with students <3
I wasn't really part of anything that happened, but I couldn't stay 100% away from it, either 🙂 (Picture from my Snapchat: sunnivarose)
Reader of the week
Last week I got the sweetest messages from a reader who told me she studies physics in Bergen, and that she wouldn't have done it if it wasn't for me. She also thanked me for this speech. She is definitely reader of the week!