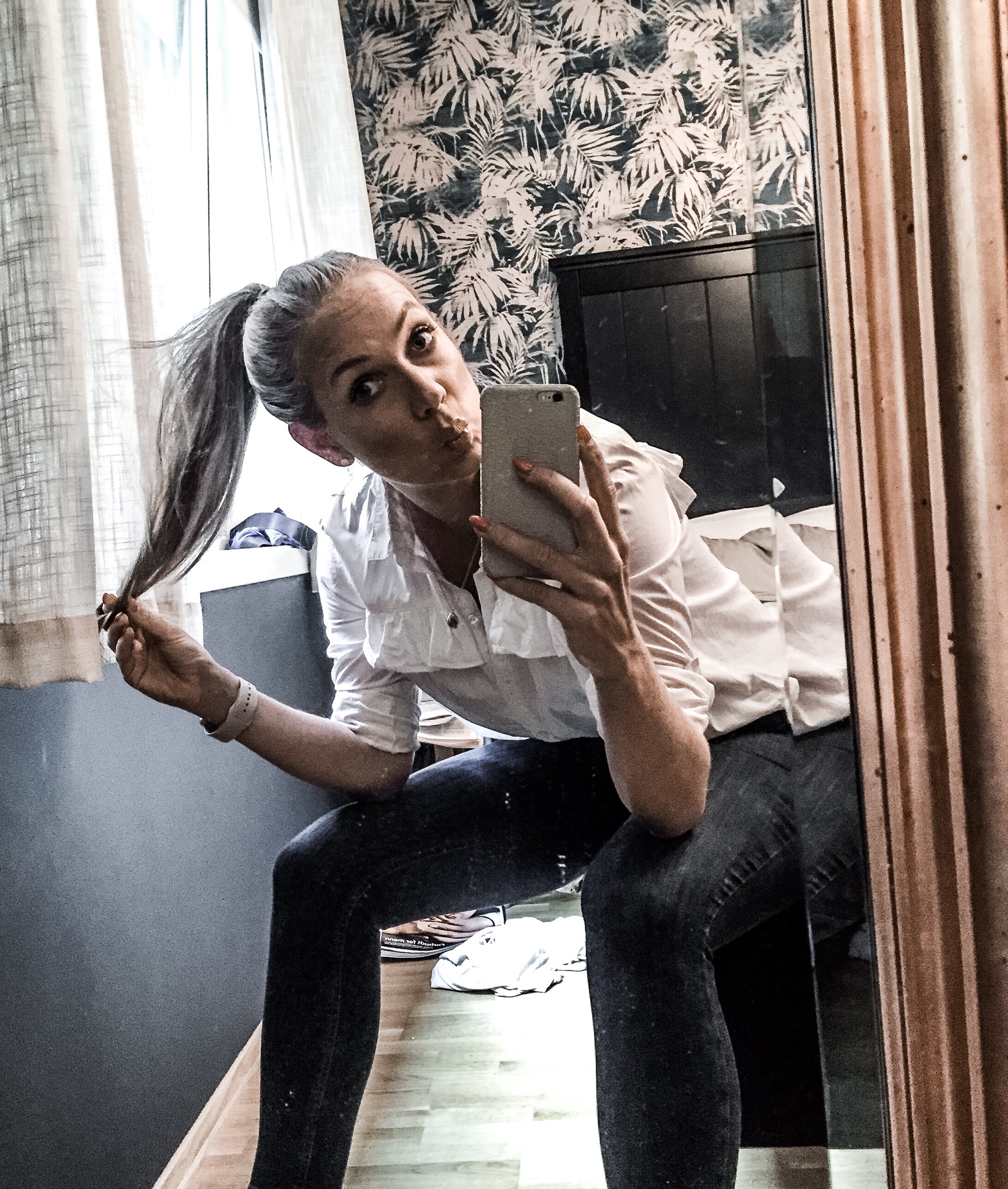 I love thai food! Often we order take-out (and I always have some kind of curry), but our "new year's resolutions" are about spending more money on actually going out, and then less money on just stupid take-out (not that it's always stupid, but we end up ordering take-out that isn't particularly tasty, and even though it's fast, it isn't that fast, and even though it isn't that expensive it adds up to being money that would have been more fun to spend on going to a restaurant, or the movies, or whatever). The "problem" is that both Anders and I work a lot these days, and we are often dead tired when we're finally home - that's when it's too easy to just grab the phone and order something to our door 😛
Yesterday was one of those days when I wanted to make something for us, but didn't really have the time, so I decided my new thing for 2016 is working your ass off-dinner 😀 Something that's super easy to make (so that we don't end up ordering take-out instead), and at least as tasty as the take-out we would have eaten instead - for people who are "working their ass off" 😉 A real working your ass off-dinner (either you're working hard because you're trying to do a phd, or you're a student or whatever) has to be:

2) no planning needed - it has to be possible to make the moment you think I'm hungry, I want dinner

4) fast - it has to be ready almost the moment you think I'm hungry, I want dinner

The goal is that you can use stuff that's in your freezer, or canned, or dry - stuff you can buy long before you're actually going to use it. I have now filled my freezer with frozen vegetables: broccoli, green beans, spinach, and a "thai wok vegetable"-mix thingy. Also I buy a big bag of mushroom that I chop and put in plastic bags in my freezer, and I do the same thing with chicken. I also have canned stuff, like coconut milk and tomatoes - they last forever <3
Yesterday I made working your ass off-thai curry, and here's my recipe:

You can also add: lime/lemon, fish sauce (Nam Plah), some cream - these are ingredients I always have, and I added. Yesterday I happened to have some spring onions that needed to be eaten, and they are perfect for more or less everything so 4 of them went into the curry.

both pastes (curry and tomyum) lasts "forever" after they're opened - just shut the lid tightly, and put them in the fridge

Put some flavorless oil, like rapeseed oil, in a pot. Heat it and put in a tablespoon of the curry paste. (You can use more if you want a hotter version, and less if you want a milder version.)

Stir, and put a tablespoon or two of the tomyum paste in the pot. Turn down the heat, and mix the two pastes together.

If you have, you can add some cream - I love cream, so for me it's (almost) no question about this one 🙂

Add the meat (chicken or other type) and the vegetables. When the meat is cooked through, it's more or less ready.

Taste it. Add pepper and a little bit of fish sauce (or salt), squeeze a lime/lemon if you have. Ready!

I like to eat it just as it is, but Anders prefer some rice at the side. You can choose whatever you like 🙂

This is of course not my "very best perfect fantastic gourmet"-recipe for thai food, but the very easiest way (I can think of) to do it. It's easy, it's quick, it's simple, and it's quite tasty - what you need when you're busy working your ass off <3
You can of course also change all the frozen ingredients into fresh ones, and suddenly you have an even tastier more "fancy" curry version. And if I had more time, I would have chopped a chilli and some garlic and added them at the beginning, before the mushroom.

The actual cooking part doesn't take any more time, but you have to cut the vegetables, the mushroom and the meat, and you have to buy everything fresh...:)

Bon appétit, and good luck with working your ass off <3

The title really says it all...But to make it (super) clear: since I wrote about #teamsunnivarose I've received a lot of really cool snaps (not so many picture on Instagram - maybe we could do better there, and really "show off"? :O ) from some great students (and others). Thank you so much, you make me happy and motivated every time!
It would be so cool, though, if even more people would join the the team, since there's room for more - let's motivate each other 🙂

Let's be proud, and let's not be afraid to show 🙂
Everyone can join #teamsunnivarose, and everyone's welcome <3
---------------------------------------------------------
I'm on my way to Stavanger now, where I'll be talking about why choosing science tomorrow 🙂
Tomorrow evening I'll be going back home to Oslo, and that'll be good, since I really miss Anders now (yup; haven't seen him since Monday, and I'm already crying myself to sleep...ok, not all of that is true, but you get the picture 😛 ) - falling asleep next to someone you love is the best, and safest, feeling in the world <3
One of the results from three very good days here at Soria Moria (except my article number 2 is actually really starting to look like something, and I've had some great discussions with Sunniva Supervisor; not only about this article, but also the next one - that I'm so eager to start at 😀 ) is that I actually got my self a working title of my thesis...! (OMG)
I don't dare share it with you guys just yet - I need to sort of "feel" it for a while... But it has words like uncertainties, modelling, thorium, nuclear, and reactor in it <3
It actually feels really good just have an actual title for your thesis document 😉

PS: I managed to reach my goal to get up and start quite early every day this week, but I must admit I'll have to spend some time during the weekend to get through all the rest of my goals. I think I'll manage, though 🙂
You guys have been great too - it's so cool to get snaps from all you hard-working, goal-chasing people! Go #teamsunnivarose <3

As I mentioned yesterday I would like to do a sort of let's motivate each other thing, where we could share pictures on Instagram (I'm @sunnivarose) or Snap (I'm sunnivarose) or Twitter (@sunnivarose here too) - anything to cheer each other up, and to be proud of our selves. Can we use social media to cheer each other up? I think we can, and it would be so much fun:
To do this, we need a tag, and since I want you on my motivation team, the tag is #teamsunnivarose - join my team, I need your help!
Here are a couple of snaps that I've made during this day and yesterday:

Yesterday I was all up to date, and I was early at the office - as planned 😀
Today hasn't exactly been the same success: I did manage to be early at the office, but I was also supposed to write for three hours (only done 1), work on the Strength Function part of the uranium analysis (maybe even finish it), plot a lot of stuff, and discuss with Sunniva Supervisor (who is in CERN - which I didn't know when I made the plan yesterday, so that one isn't on me). Then this day just took a totally different turn, and I have almost done nothing...however, it's only Tuesday, and I'm quite confident I'll manage to get through my plan of the week by the end of the week - maybe this is where we can help each other...?
When it come to my writing goal this week, I'm certainly not giving up: I WILL DO 20 HOURS! Tomorrow I'm going on a writing seminar that lasts to Friday, so that's why I'm so positive 🙂 But before that I'm going on "Tidenes morgen" on P13, to talk about fusion...so now it's dinner with Anders, and the some nuclear fusion reading <3
Have a beautiful evening, and GO TEAM!

Hello everyone, and hello Monday!
It's been a while since I shared my study/research plan of the week with you guys, but I was thinking maybe it's a good time to start again. As I was sort of saying yesterday, I'm starting to get nervous about finishing the PhD, feeling a little like I'm drowning in a hole, and I almost get dizzy from trying to just start somewhere... To solve this, I have to do (at least) two things, I believe:

1) Plan my week (this will help me set goals, and check if I actually achieve them)
2) Get up early, and start working at the office early - every day(!)

I know "early" is sort of a relative term, but in academia, where almost nothing starts before 10:15, I think before 9 is early.
So this is what my (research) plan of the week looks like - there's a lot of focus on writing article number 2 now, as you can see 😉 Hopefully I can soon put this article a little bit behind me, and focus on newer stuff...

Goals: Be at the office before nine every day, and spend 20 hours on writing on that (stupid) second article. I don't know exactly where that will take me, but if I just manage to fulfill this writing goal, I will know by the end of this week, and hopefully then I can "see the light" again.
Anyone want to join me? Maybe we could do a sort of let's motivate each other kind of thing? I mean, I can't be the only one struggling with writing articles/PhD thesis/doing my research/preparing for an exam/Master thesis or whatever... Maybe we could even do a hashtag or something? I'm not exactly sure of what it could be yet, but I'm thinking 🙂
Anyway, wish you all a great start at the new week, and good luck with all your goals! The first thing I'm going to do now is to read through and then send off my current draft of article2 to Sunniva Supervisor - then I can already put the first "check" on my plan 😉
PS: I was at my office at 08:20 this morning - great start for me, so far...